CAMDEN — During Chris Christie’s first term as governor, he made tax incentives a cornerstone of a promised “New Jersey Comeback” that would lure new businesses to the state.

With New Jersey’s job growth still poor at the beginning of his second term last year, the governor doubled down.

New Jersey’s Economic Development Authority has handed out more than $2 billion in tax breaks since 2014, more than the total amount issued during the decade before Christie took office.

The aid has gone disproportionately to businesses in Camden, a city of 77,000 that ranks among the nation’s most impoverished. Development projects in the city received $630 million in future tax breaks last year. Because of those grants, Christie said in his State of the State address, Camden is “seeing a new tomorrow.”

As Christie considers a Republican presidential campaign, the prospect of a renaissance for heavily Democratic Camden would offer a useful counterpoint to New Jersey’s lackluster economic performance. But a closer look at the grants — which will amount to nearly four times Camden’s annual budget — indicates they may do less for the city than advertised and more for Christie’s political alliances. The state law that set up the more generous grant program was adopted in 2013 by a Democrat-controlled legislature and signed by Christie.

Most of the jobs coming to Camden are filled by existing employees who currently work just a few miles away. One tax break exceeded the value of the company that received it. Another went to a developer who owes New Jersey millions of dollars in long-unpaid loans. And nearly all the recipients boast notable political connections — either through an affiliation with a prominent southern New Jersey power broker, Democrat George Norcross, or through donations to Christie and the Republican Governors Association during his tenure overseeing it.

“Giving huge subsidies to companies moving from the suburbs of Camden to the city is just off-the-charts crazy territory,” said Michael Doherty, a Republican state senator. “If you’re a high-profile individual, you can get the EDA to make decisions to your benefit.”

Christie spokesman Kevin Roberts said in an email that critics of the tax breaks “offer no alternative plans for creating jobs, growing the economy or renewing our urban centers.”

Subaru is moving from Cherry Hill to Camden with the aid of some generous tax breaks. (Photo: File photo)

Driving the 4 miles from Subaru’s current U.S. headquarters in Cherry Hill to its new home in nearby Camden takes eight minutes. Tax credits granted by the state of New Jersey will make that trip worth nearly $118 million for the company.

Subaru’s short trip is not an exception: Most of New Jersey’s incentives for Camden have gone to projects shifting existing employees from nearby locations. Holtec International Inc., a manufacturer of nuclear reactor components, is receiving $260 million for relocating 160 nearby jobs and adding 235 more. Cooper University Hospital will receive $40 million, mostly for returning 353 employees that it previously moved to the suburbs. The Philadelphia 76ers will receive $82 million for bringing 250 jobs across the Delaware River, just a few thousand feet from the Pennsylvania state line.

The low bar for incentive payouts is justified due to Camden’s dire circumstances, said Timothy Lizura, president of the Economic Development Authority.

A top economist at Rutgers University’s Center for Urban Policy Research, Nancy Mantell, said: “It always concerns me that you’re just moving people around, not creating anything particularly new to the regional economy. And this is not going to help the places the companies left.”

The 76ers told the AP last year that the team expects to sell a portion of its $82 million in New Jersey incentives — the NBA franchise doesn’t make enough money to use them all. (Photo: File photo)

The scale of New Jersey’s generosity has bolstered one profitable new industry: the resale of tax incentives by businesses that can’t use them.

Economic development incentives are transferrable under state law. When New Jersey awards tax breaks in excess of a company’s tax bill, the recipient can sell them to an unrelated corporation looking to pay less in taxes. The 76ers, for example, told the AP last year that the team expects to sell a portion of its $82 million in New Jersey incentives — the NBA franchise doesn’t make enough money to use them all.

In at least one case, the value of the tax credits outstripped the value of the business that received them. In November, a Maryland medical testing startup, DioGenix Inc., received a $7.9 million tax incentive to relocate to Camden. Two months later, DioGenix sold itself for between $8 million and $10.9 million to a buyer that announced it would resell the tax breaks for at least $6 million.

Lizura said he was unaware of DioGenix’s upcoming sale when it received its state tax credits but called the sale evidence of success. The incentives are awarded only when companies meet their job and investment obligations.

“If a capitalized company comes in and buys a startup company and they live up to the approval we had, how great is that?” he said.

Diogenix’s buyer, Amarantus Biosciences Holdings Inc. of San Francisco, has been unprofitable since its founding in 2008, has less than $2 million in assets and warned investors in November that there is substantial doubt about whether it can stay in business, according to Securities and Exchange Commission filings. The company did not return phone calls from The Associated Press over several weeks.

Many of the tax breaks involve projects connected to Norcross, the Democratic power broker, whose tacit support for Christie is widely viewed as vital to his 2009 victory over then-Gov. Jon Corzine.

Norcross is on the board of Holtec, the nuclear equipment manufacturer. He also sits on the board of Cooper Hospital, which both received a grant and is the indirect beneficiary of two more — one to build housing for its students and the other to DioGenix, which the state authority said moved to Camden to work with Cooper.

Some recipients also have business relationships with Norcross and his family. Over the last three years, Cooper has paid more than $1 million to Norcross’s insurance brokerage and more than $2 million to a law firm partially owned by his brother Philip, though the hospital’s financial statements said those relationships predate George Norcross’s tenure on its board. Along with his firm’s work for Cooper, Philip Norcross’s firm represented the Philadelphia 76ers for the negotiation of the team’s $82 million in tax credits.

Dan Fee, a spokesman for Norcross, said in an email that there’s nothing wrong with his interest. “He’s been an active and regular cheerleader for companies to relocate to the city, so it’s not a surprise that he has relationships with many of their leaders — he’s been personally advocating for them to move to Camden.”

Lizura said it’s the board, not Norcross, who decides what deals get made.

“Each approval stands on its own merits,” said Lizura, the head of the Economic Development Authority. “The more cheerleaders, the better.”

A political committee supported by employees of Lockheed Martin, another recipient of a Camden grant, pumped more than $100,000 into the governors’ group during Gov. Christie’s tenure. (Photo: Courier-Post file)

As money has flowed to development in Camden, some trickled back into politics. The lead investor in the 76ers, Joshua Harris, donated $50,000 to the Republican Governors Association during the time Christie ran it, and other part-owners of the team have given tens of thousands more to the group or to Christie’s campaigns. A political committee supported by employees of Lockheed Martin, another recipient of a Camden grant, pumped more than $100,000 into the governors’ group during Christie’s tenure.

No donations are as notable as those from Pennsylvania developer Israel Roizman. Last February, the state awarded incentives worth $13.4 million to Broadway Associates 2010 LLC, a real estate development company he controls. The project in question: refurbishing 175 low-income housing units that deteriorated under two decades of Roizman’s ownership.

Roizman received the tax breaks despite having failed to repay a state loan on the nearby Camden Townhouses development. A company he owns owes New Jersey’s Housing and Mortgage Finance Agency a total of $6.2 million in unpaid principal and interest on a loan that has been overdue by several years.

The agency does not consider the loan in default because it is still hoping to work out a repayment deal and does not believe it would gain much by foreclosing, spokeswoman Tammori Petty said.

Roizman is one of the region’s top political donors, giving as much as $100,000 each year and raising six-figure sums for national candidates. Though his contributions have overwhelmingly supported Democratic entities — Roizman was a campaign bundler for President Barack Obama — he cut a $10,000 check to the Christie-led governors association in late 2013, just before Christie became chairman and a few months before receiving his tax breaks. Last year, when Christie was at the helm, he gave the group the same amount.

The AP asked Roizman how he received additional money from New Jersey despite owing the state so much money.

“Why don’t you call the state and let them explain that to you?” Roizman said, then hung up.

New Jersey housing officials said that near the end of its multi-decade loan to the Roizman Camden development, the property ceased being profitable. Because Roizman did not personally guarantee the loans, the state has no recourse against the developer himself.

Gov. Chris Christie greets residents at a gathering in Camden last September. Christie has made frequent stops in the high-crime city, stressing his efforts working with local Democratic lawmakers, including Mayor Dana Redd. Under Christie, New Jersey has paid more than $2 billion in state tax breaks since 2014, often to corporations with notable political connections and at least one developer who already owed millions of dollars in unpaid state loans, an Associated Press review found. (Photo: MEL EVANS/ASSOCIATED PRESS FILE) 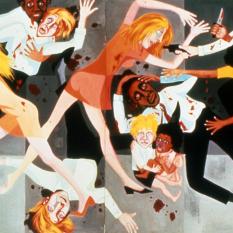