In Dream of a Sunday Afternoon in Alameda Central Park, hundreds of characters from Mexico’s history gather for a stroll through Mexico City’s largest park. The mural is a surrealist scene, complete with historical personages, which portrays 400 years of Mexican history. Read from left to right, the mural chronologically progresses from the conquest and colonization of Mexico (left), to the Mexican Revolution (center) through to the modern era (right). Prominent figures represented in the mural include: Hernán Cortés, the Spanish conqueror who initiated the fall of the Aztec Empire; Sor Juana, a seventeenth-century nun and one of Mexico’s most notable writers; Porfirio Díaz, whose dictatorship at the turn of the twentieth century inspired the Mexican Revolution; and President Benito Juárez, who restored the republic after French occupation.

The center scene of the mural has been described as a snapshot of bourgeois life in 1895 Mexico — refined ladies and gentlemen promenade in their Sunday best, under the watchful eye of Porfirio Díaz in his plumed military garb. One gets a sense of the inequality which stirred Mexican commoners to overthrow the dictatator Porfirio Díaz and establish their independence.

The centerpeice of the mural is a self portrait of Rivera, standing with his wife, artist Frida Kahlo, printmaker and draughtsman, José Guadalupe Posada, and Posada’s Catrina Skeleton character. Catrina was a slang term in early Twentieth Century Mexico, to describe an elegant, upper-class Mexican woman who dressed in European fashion.

Posada’s depiction of La Catrina as a skeleton was understood to be a critique of the Mexican elite. Rivera adorns La Calavera Catrina with an elaborate boa necklace, representative of the feathered Mesoamerican serpent god Quetzalcóatl. 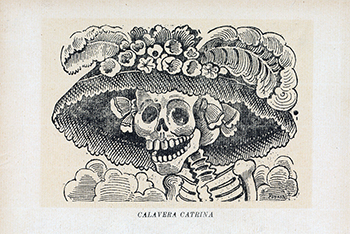 More often than not history is written by the victor and thus reflects an incomplete story. Dream of a Sunday Afternoon in Alameda Central Park is the antithesis of this: Rivera gives voice to the the forgotten indigenous population normally edited from the historical record by telling their story through his grand narrative. The artist reminds the viewer that the struggles and glory of four centuries of Mexican history are due to the participation of Mexicans from all strata of society.