“…Our problem is to conceive, develop, establish an art era. Not white art painting black…let’s bare our arms and plunge them deep through laughter, through pain, through sorrow, through hope, through disappointment, into the very depths of the souls of our people and drag forth material crude, rough, neglected. Then let’s sing it, dance it, write it, paint it. Let’s do the impossible. Let’s create something transcendentally material, mystically objective. Earthy. Spiritually earthy. Dynamic.”
– Aaron Douglas
Aaron Douglas (1898-1979) was the Harlem Renaissance artist whose work best exemplified the ‘New Negro’ philosophy. He painted murals for public buildings and produced illustrations and cover designs for many black publications including The Crisis and Opportunity. In 1940 he moved to Nashville, Tennessee, where he founded the Art Department at Fisk University and taught for twenty nine years.
Aaron Douglas completed these sketches  in preparation for a mural he painted under WPA sponsorship fir the 135th Street branch of the New York Public Library in Harlem. The four-panel series Aspects of Negro Life tracks the journey of African Americans from freedom in Africa to enslavement in the UNited States and from liberation after the Civil War to life in the modern city. 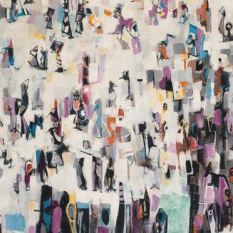