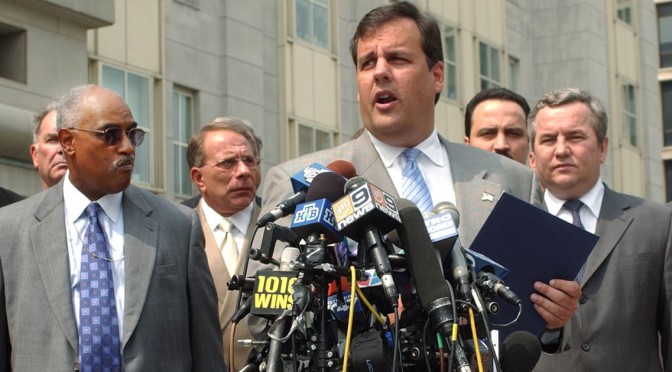 The state said it did not know the fate of the secret recording. Gubernatorial candidates urged an investigation

New Jersey’s top federal prosecutor took the unusual step yesterday of announcing that his office is investigating the disappearance of a secretly recorded videotape of George E. Norcross III, one of the state’s most powerful political figures.

The announcement was made after the state’s principal gubernatorial candidates, Republican Douglas Forrester and Democratic Sen. Jon S. Corzine, called on U.S. Attorney Christopher Christie to determine how the tape disappeared and who in the New Jersey Attorney General’s Office was responsible.

“The U.S. Attorney’s Office is fully investigating this matter,” Christie said in a statement late yesterday afternoon. “Therefore, we have no further comment.”

The videotape of Norcross and his attorney meeting with a top state prosecutor was made in July 2001 while the New Jersey Division of Criminal Justice was involved in a political corruption investigation of JCA Associates Inc., a Moorestown engineering firm.

The way the Attorney General’s Office handled the JCA probe is emerging as a key issue in the gubernatorial race. Both candidates have spoken out on it.

Yesterday was the first time Christie commented publicly. His office, however, has been gathering information for months.

It recently obtained a court “share order” that allowed state authorities to turn over all material gathered in the two-year probe, including transcripts of grand-jury testimony, according to individuals familiar with the investigation.

The FBI also has begun interviewing individuals and has been reviewing hundreds of hours of conversations secretly taped by state investigators.

A spokesman for the Attorney General’s Office said yesterday that the state welcomed federal involvement. John R. Hagerty also said his office would ask the state’s new Office of Government Integrity to conduct an independent examination.

“We welcome any outside review,” Hagerty said.

At a court hearing a month ago, state authorities insisted that the meeting had not been videotaped and that media reports of the existence of a tape were in error.

“This reeks of Watergate-like corruption,” Forrester said in a letter to Christie. “We need an independent investigation to get the truth before more tapes are lost or altered.”

Forrester called on Corzine to “demonstrate his independence from George Norcross” by joining in asking for a federal probe.

Within hours, Corzine did just that, releasing a letter he sent to Christie asking for “a full and thorough investigation to determine whether any laws were violated and to ascertain why the correct information was not initially provided with regard to the existence of the videotape.”

As a result of civil litigation, the Attorney General’s Office has already released dozens of tapes from the JCA investigation. But until it was reported in The Inquirer, the office never disclosed that Norcross had met with a top prosecutor and that authorities had secretly audiotaped and videotaped that session.

At that meeting, Norcross urged Zarrillo to discontinue the JCA investigation, contending the allegations were politically motivated.

After the report of the meeting, the Attorney General’s Office released an audiotape of the session but denied that the meeting had been videotaped.

Last month, in fact, a state investigator and a state prosecutor told a state Superior Court judge that there was no videotape. After Judge John A. Sweeney asked for further proof, the prosecutor and two investigators reversed the state’s position, acknowledging that a videotape had been made. They claimed, however, that it had been misplaced or inadvertently destroyed.

Norcross has never been charged with a crime and has insisted that the investigation was sparked by two disgruntled political opponents, Palmyra Mayor John Gural and lawyer Ted Rosenberg.

Gural and Rosenberg contend that the Attorney General’s Office failed to diligently pursue a probe into bribery and influence peddling.

“Long before this became a political football, George Norcross called for the release of these tapes,” William Tambussi, another Norcross lawyer, said yesterday. “Now he is suffering the brunt of this comedy of errors.”

Rosenberg said yesterday that he intended to file a motion in Superior Court, where the tape issue is being argued, asking that the Attorney General’s Office be held in contempt for misleading the court about the existence of the videotape.

In his filing, Rosenberg said he will ask for permission to depose all the Attorney General’s Office personnel involved in the handling of the videotape in an attempt to determine whether it exists within the Division of Criminal Justice.