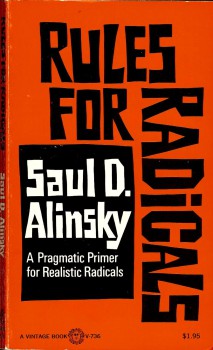 Rules for Radicals, written by Saul Alinsky is a classic treatise on grassroots organizing. The first paragraph of Alinsky’s seminal work is as confrontational as his tactics:

“What follows is for those who want to change the world from what it is to what they believe it should be. The Prince was written by Machiavelli for the Haves on how to hold power. Rules for Radicals is written for the Have-Nots on how to take it away.”

Alinsky championed new ways to organize the poor and powerless which created a backyard revolution in cities across America. In the 1950s, he succeeded in organizing Chicago’s  African-American ghettos, which ignited similar movements in New York City, Detroit, MI, Oakland, CA, and dozens of other affected communities. His strategies were later adopted by young, counterculture-era organizers to challenge racial segregation and the U.S. war efforts in Vietnam. Conservative author William F. Buckley has credited Alinsky with being “very close to an organizational genius.”

For Alinsky, community organizing was the process of highlighting the problem to be solved, then convincing individuals change was possible. Alinsky recognized that If individuals do not believe they can change their circumstances, they will simply ignore the problem. Therefore, a movement must be sustained through hope and encouragement that the desired outcome can be achieved.

Alinsky advocated a form of militant diplomacy which forces power to respond to the activist. Some of his suggestions included:

“Ridicule is man’s most potent weapon. There is no defense. It’s irrational. It’s infuriating. It also works as a key pressure point to force the enemy into concessions.” (Rule #5)

“Pick the target, freeze it, personalize it, and polarize it.” Cut off the support network and isolate the target from sympathy. Go after people and not institutions; people hurt faster than institutions.” (Rule #12)

Alinsky’s controversial tactics are not for everyone, but anyone who is serious about social change should read his book. It is an essential primer for understanding and preparing against the tactics you can expect to face when challenging the status quo.

A free .pdf version of the book can be found here:

A reformation means that masses of our people have reached the point of disillusionment with past ways and values. They don’t know what will work but they do know that the prevailing system is self-defeating, frustrating, and hopeless. They won’t act for change, but won’t strongly oppose those who do. The time is then ripe for revolution. — Rules for Radicals: A Pragmatic Primer for Realistic Radicals, p. xxii

Curiosity and irreverence go together. Curiosity cannot exist without the other. Curiosity asks, “Is this true?” “Just because this has always been the way, is the best or right way of life, the best or right religion, political or economic value, morality?” To the questioner, nothing is sacred. He detests dogma, defies any finite definition of morality, rebels against any repression of a free, open search of ideas no matter where they may lead. He is challenging, insulting, agitating, discrediting. He stirs unrest.
― Rules for Radicals: A Pragmatic Primer for Realistic Radicals, p.26

The organizer becomes a carrier for the contagion of curiosity, for a people asking “why” are beginning to rebel.
― Rules for Radicals: A Pragmatic Primer for Realistic Radicals, p. 72

Society has good reason to fear the radical. Every shaking advance of mankind toward equality and justice has come from the radical. He hits, he hurts, he is dangerous. 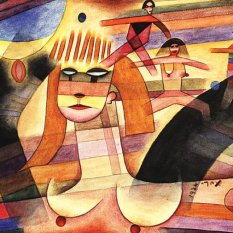