When cellphones flashed “noon” in Ziaira Williams’ history class, students shifted in their seats, exchanged glances, and then filed out into a hallway of purple and gold, launching a two-hour protest of Camden City School District layoffs.

Williams’ history teacher received a layoff notice Monday and said goodbye to his exiting pupils with silent pats on the back and nods of appreciation, Williams said.

“They’re glad we’re doing this. They said, ‘Go ahead,’ and honestly, I don’t care if I get in trouble – I want my teachers back,” the 17-year-old junior said.

Hundreds more would join the two-mile march from Camden High to the Board of Education building downtown Wednesday afternoon, including students from Creative Arts Morgan Village Academy, Brimm Medical Arts High School, and Woodrow Wilson High School, many carrying signs and chanting, “Save our teachers!”

The walkout came in response to the district’s announcement Monday that it would lay off 272 people, 206 of them teachers, to bridge a $75 million revenue gap. Samir Nichols, a senior at Creative Arts and the school’s valedictorian, said he organized the rally.

The protest grew so large that police blocked off Haddon Avenue and Cooper Street. It apparently prompted NJ Transit to suspend for about an hour service on the RiverLine between the Walter Rand Transportation Center and the waterfront.

Superintendent Paymon Rouhanifard said he would encourage principals not to suspend students for the day’s protest. “We respect their right to peacefully protest,” he said.

On the route downtown, students sat on the roofs and hoods of cars rolling alongside the pack, which filled the two-lane roadways. Students in the marching band brought along their instruments to play Camden High’s fight song.

“We feel like our teachers are being disrespected,” said Dejon Sullivan, 18, student body president of Camden High and the student representative for the school board who attends monthly meetings.

“It’s disgusting to me. I believe the education is not the greatest here, but we’re trying to progress. Our teachers have a lot to do with that progress. Camden High is my home, no matter how many fights we have, no matter what. It’s my home, and these teachers treat me like I get treated at home.”

Former Camden school board member Sara Davis watched from her porch as the students marched by.

Davis disagreed with many of the changes state-appointed superintendent Rouhanifard was bringing to the district, including two “Renaissance” schools, which will open in the fall, pending state approval.

“I’m glad to see the kids are interested in what’s happening. Hopefully it will have an effect, but the bottom line is, more people should be speaking on their behalf,” she said.

She said the last time Camden students staged a walkout was in the late 1960s.

As the crowd walked passed Hatch Middle School, little heads peered out of windows, waving at the older students, below who beckoned them to join them outside.

The large revenue gap comes in a district that already has one of the highest per pupil expenditures in the state at $23,500. The student-to-teacher ratio is extremely low at 9-1. It will be 11-1 after the layoffs.

Officials cut $28 million in non-personnel costs, but also cut $29 million through the layoffs. Charter school transfer funds increased to $72 million for next year.

Most students said they were upset to find teachers suddenly without jobs. Because layoffs were based on seniority, evaluations, attendance, and other qualitative measures did not come into consideration.

Some echoed school-choice critics, saying they didn’t want to see public schools get turned over to private operators. The leaders of both magnet high schools in Camden, Brimm, and Creative Arts, have said they are looking into charterizing, a process they would go through with the state, not the city.

Once outside the Board of Education building, students chanted from the steps as employees peeked out from office windows.

Parents and community members from Save Our Schools joined in the protest, at times appearing to run it. Ronsha Dickerson stood at the top of the steps and yelled out to students, “They’re laying off all your teachers, they’re closing your schools.” She called for teachers to strike and make a trip to Trenton to see the governor next week.

Up on the seventh floor of the administration building, Rouhanifard heard the chants and decided to face the large crowd.

“We’re not closing any schools, no schools are closing, we’ve been saying that for the past three months,” he yelled over the crowd. “We have a budget problem; we’re trying to manage it as best we can. We’ve cut other areas, too. This is a really hard time for everybody – for you, for your teachers.”

Rouhanifard said he would meet with representatives from each school in the next two weeks. Some teachers could be reappointed in the fall, but fewer positions will be available than in previous years, he said. Before heading back into the building he told students:

“This dialogue is important and we’re going to continue to have the conversation, OK? That’s my commitment to you all.” 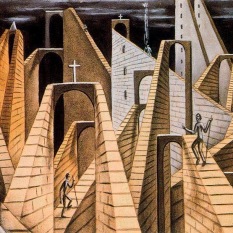