Jacob Lawrence (1917-2000) was an American painter, associated with the Harlem Renaissance and the Social Realist Movement. Lawrence forged a unique and original art form, combining the tempera technique (pigment mixed with a binder consisting of egg yolk thinned with water) with a cubist style. All of his work was unmistakably modern, but remained within the conceptual framework of realism and figurative painting. Lawrence referred to his style as “dynamic cubism,” though by his own account the primary influence was not so much the French tradition, so much as the shapes and colors of Harlem.

A student of Charles Alston, Lawrence quickly became immersed in the cultural  and political fervor of the artists and writers who led the Harlem Renaissance. He is best known for his 60-panel Migration of the Negro series, which depicts the Great Migration of African Americans from the rural South to the urban North.

Lawrence was born in Atlantic City in 1917.  His parents had moved from the rural South to find a better life in the North. However, after his parents separated, Lawrence and his two younger siblings were forced to reside in settlement houses and foster homes in Philadelphia until their mother could support them in New York.

Lawrence arrived in New York in 1930, at the age of thirteen, in the midst of the Harlem Renaissance.  Lawrence studied in the Harlem Art Workshop, funded by the newly-established federal Works Progress Administration. The artistic and cultural awakening within the rapidly growing Harlem community was in full swing and Lawrence was able to associate with most of the major figures in this cultural circle, including Howard University professor Alain Locke, writer and poet Langston Hughes, novelists Richard Wright and Ralph Ellison, and painters William Johnson and Aaron Douglas.

The Great Depression marked a turn towards greater political involvement on the part of black intellectuals. Locke urged black writers and artists to take pride in their unique African culture and incorporate it into their artistic themes. Artists like Langston Hughes, Aaron Douglas and Jacob Lawrence began to focus on the universal struggle for social equality. Lawrence’s earliest work reflects the political ferment of these years. It satirizes life in Harlem during the Great Depression, depicting poverty, poor health care, police harassment, evictions and racial discrimination.

In 1936, Lawrence enrolled at the American Artists School, where he met politically active artists involved in the Scottsboro case, the infamous civil rights case involving nine African-American teenagers in Alabama falsely accused of raping two White women on a train. It was during this period that Lawrence would meet painter Gwendolyn Knight, whom he would later marry.

In 1938 Lawrence was able to obtain a position with the WPA’s Federal Art Project, working in the easel division. Over the next 18 months, while the federal government provided at least some support for struggling artists, the young painter produced two narrative series on the lives of abolitionists Frederick Douglass and Harriet Tubman.

In 1940, Lawrence received a grant from the Rosenwald Foundation to create a series of images on the migration of African-Americans from the South. With the help of a fellowship, Lawrence was able to rent his first studio, providing enough space to lay out all 60 panels of the work. As in all of the narrative cycles he had painted, the individual paintings were each accompanied by captions. Lawrence’s wife, Gwendolyn Knight, assisted him on the captions for the images and the initial coating of the panels.

In 1941 The Migration of the Negro series  debuted at the Downtown Gallery in Manhattan. Lawrence was the first artist of color to be represented by a major New York gallery, and the success of this exhibition escalated him into the national spotlight. Lawrence was the first black artist to achieve national prominence during a period where the art world, and American mainstream culture as a whole, was still deeply segregated.

Lawrence remains one of the most celebrated American artists of the Twentieth Century and his works are in the permanent collections of numerous museums, including the Philadelphia Museum of Art, the Museum of Modern Art, the Whitney Museum, the Phillips Collection, the Metropolitan Museum of Art, the Brooklyn Museum, and Reynolda House Museum of American Art. 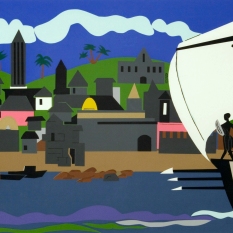 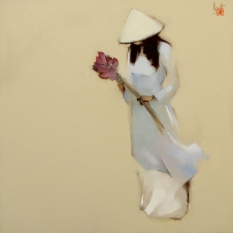