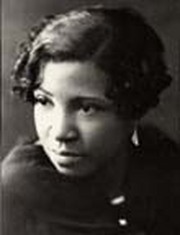 Lois Mailou Jones (1905-1998) was an American abstract-expressionist painter associated with the New Negro Movement. Jones’ numerous oils and watercolors incorporating African and Hatian motifs are her most widely recognized works. Jones’ mastery of the principles of Cubism, her affinity for bright colors and her unique ethnic style have proven to have an enduring appeal.

Jones was born and raised in Boston, Massachusetts, where she attended high school at Boston School for the Practical Arts, on scholarship. Jones spent many of her after-school hours working and studying at the Boston Museum of Fine Arts. Upon graduation, Jones received the Susan Minot Lane Scholarship to study at the Boston Museum of Fine Arts. Jones graduated with honors in 1927, but soon realized that her options in the Boston art world were frustratingly limited when the director at the School rejected her application for a post-graduate teaching assistant position and recommended that she move to the South to “help her people.”

Jones recognized early in her career that her ambition to become an established painter would be no easy task. 1927 America was not an especially receptive environment for aspiring Black painters, as mainstream art galleries still excluded African American artists. To gain exposure for her works, Jones often resorted to having Caucasian colleagues enter her works into exhibitions as their own. As a result, prizes awarded to Jones’ pieces were often retracted once it was discovered she was African-American.

In 1928, Jones briefly considered moving to New York City to join Alain Locke and the artists of the Harlem Renaissance. Instead, she relocated to Sedalia, North Carolina, after being recruited by the Palmer Memorial Institute, a black preparatory school, to establish their art department. Jones’ student exhibitions soon attracted the attention of faculty at Howard University, who offered her a position as a professor of design and watercolor painting. In 1930, Jones joined the University’s Fine Arts Department, where she taught for the next 47 years.

In 1931, Jones began preparing illustrations for the Negro History Bulletin, which was produced at Howard by historian Carter G. Woodson. During the early 1930s, Jones primarily painted realist portraits of African-Americans as part of the “New Negro” movement’s effort towards creating sympathetic representations of the Black American experience.

In 1937, Jones received a General Education Board foreign fellowship to study abroad in France. While on sabbatical from Howard, Jones attended the Académie Julian, in Paris, where she primarily focused on pastoral landscapes and Parisian street. scenes in the French tradition. Jones time in France was a period of self-realization; for the first time in her life she experienced what it was like to live in an unsegregated society. Cherishing the racial inclusivity of French culture, Jones spent most of her summer vacations in Paris over the next twenty years.

Jones was inspired by the African art exhibits she attended while in France. It was during this creative period that Jones brushed Les Fétiches, an oil on linen, circa 1938, which depicts five African tribal masks in a modernist/cubist style. Jones was one of the first African American artists to incorporate African imagery into her works. Les Fétiches was later purchased by the National Museum of American Art as part of its permanent collection.

As a representative of the New Negro movement, Jones was encouraged to produce work that was relevant to the African-American experience. Jones did so, but often in an impressionistic manner. Her 1944 painting Mob Victim (also known as Mediation) made a particularly strong statement. The painting depicts an African-American man about to be lynched, calmly awaiting his fate. It won first honorable mention for oils at a competition in Paris.

By the time the Civil Rights Era erupted in the 1960s, Jones’ had come to be perceived by some of her students at Howard as part of the establishment. She attempted to bridge the generational gap by depicting contemporary scenes of the counter culture revolution developing in America. In 1963, Jones commemorated the evolving struggle for racial equality with the collage, Challenge America, based on sketches made at the 1963 March on Washington.

In the late 1960s, Jones received a grant from Howard to conduct an extensive research tour of 11 African nations. The purpose of her trip was to highlight the work of indigenous African artists.  Upon completion of her tour, Jones’ early interest in traditional African motifs was reinvigorated. Her paintings became bold and abstract, and African design elements once again began to dominate her work. This period of resurgence is best exemplified by Moon Mask, c. 1971 and  La Baker, c. 1977.

Despite her early adversities, Jones’ perseverance eventually paid off. In 1973, she received the distinction of becoming the first African American artist to be given a solo exhibit at the Boston Museum of Fine Arts. Jones retired from Howard University in 1977, after a distiniguished career which included mentoring over 2500 students, which included artists such as David Driskenn and Elizabeth Catlett who would later gain prominence in their own right.

By the mid 1990’s, Jones finally began receiving much deserved recognition for her early involvement with the New Negro Movement, which paved the way for generations of aspiring African-American artists. A mainstream audience was exposed to her work in 1995, when she prepared a poster for Cry, the Beloved Country, prompting Jones to proclaim, “At 90, I arrived!” Many leading museums and galleries held retrospective exhibits of her work, including a traveling retrospective, “The World of Lois Mailou Jones.”

In 1998, Jones passed away at the age of ninety-two. She is fondly remembered for her tireless dedication in promoting the international art of Africa and Haiti. Her artistic legacy has been preserved by the inclusion of her works in the permanent collections of some of America’s most prestigious art museums, including the Metropolitan Museum of Art, Corcoran Gallery, and the Boston Museum of Fine Arts.